Adding large panelled sliding doors and modern windows have given a light and spacious feel to this remodelled WA home.

Wide-panelled sliding doors and a variety of modern windows have played a crucial role in the transformation of this 1950’s Art Deco WA home into a series of large, light, connected living spaces. In utilising a mix of residential and commercial framing products from Alspec and Carinya, the newly added and remodelled existing portions of the home now provide multiple locations for the family to interact and relax.

Located in the northern Perth suburb of Coolbinia, the home now enjoys an expansive opening to the poolside entertaining area, strategically positioned double glazing to keep temperatures stable, and a range of windows and louvres orientated to promote passive cooling.

To create the interface between primary indoor and outdoor areas, a series of ProGlide High Performance Sliding Doors were installed, spanning a width of 7.5m and a height of 2.5m. The doors easily operate across the distance, thanks to their heavy duty roller system developed in the commercial environment. While the doors create a secure barrier when closed, a large Centor S1 screen was added to provide insect protection when the doors are open. Operated with fingertip control, the Centor screen retracts horizontally into its frame when not in use.

Across the home new windows were required to replace existing timber windows and to complete openings in the new addition space. Awning windows were drawn from the Carinya product range while ProVista Sashless Double Hung Windows were used in other locations. The Carinya windows feature a bevelled edge look which contributes to the home’s high-end feel, while their strength and durability meet performance requirements. The ProVista Sashless Double Hung Windows achieve a minimalist look, as the two panes of glass slide smoothly past each other. The sashless windows are suitable for both new and retrofit situations such as needed for this home, and are available in two, three and four pane configurations.

For fixed panes of glazing, ecoFRAMEplus 150mm Centre Pocket Double Glazed Framing was selected, for its compatibility with the window ranges and for its energy credentials. The robust framing was added in appropriate locations to control solar impacts while at the same time offering excellent weather protection. To further contribute to year-round energy efficiency, and to assist with passive cooling, Alspec Air-Flo Glass louvre systems were added to the bathroom and utility spaces. Air-Flo louvres are a secure way to utilise openable windows to encourage natural ventilation.

During the significant renovations undertaken to update the front of the home, a pair of Carinya French doors were added. With their 85mm wide face, the Carinya Select 125 Hinged doors deliver a modern appearance, while benefiting from the same durable componentry as the entire Carinya window and door ranges. 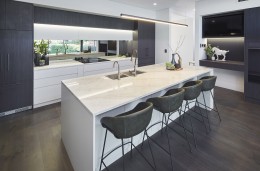 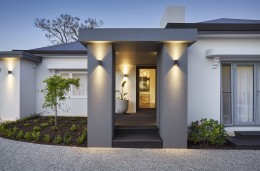 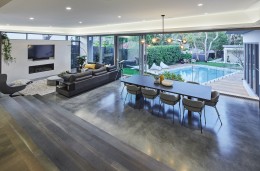 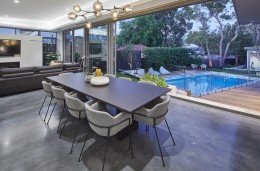 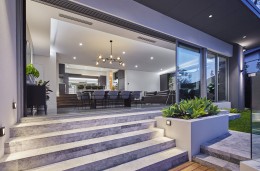 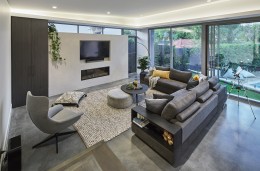 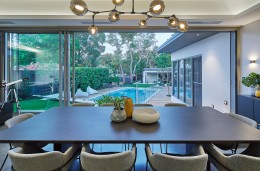 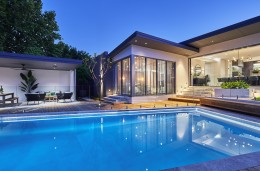 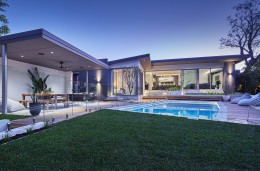